Turning Over and Raising a New Leaf 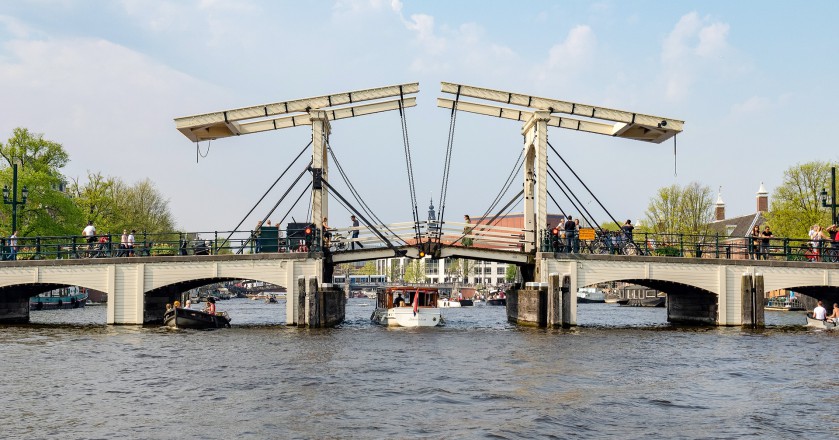 We have briefly discussed movable bridges, but, like submersible bridges, it is time to go beyond the surface level and dive deeper into the subject. I spotlighted a few types of movable bridges in our last blog, but this time we will be looking at bascule bridges, also called drawbridges. There are 1.037  bascule bridges in the U.S. and that number is growing. Chicago has the most variety of drawbridge designs in the world, and Amsterdam actually has the most drawbridges in the world. Amsterdam has 1,281 bridges (not all of them movable) to cover 165 canals. Picture any romantic movie you have ever seen. Including the classic couple boat ride, accompanied by a singing man leading through the water. The ride is lined with colorful houses along the sparkling water. Sound familiar? The Magere Brug bridge over the Amstal Canal bridge in Amsterdam is the stereotypical image from romantic movies. It is also one of the most famous bascule bridges in the world due to its romantic ambience.

The name comes from Magere Zussen, meaning skinny sisters. It is known to English speakers as the skinny bridge.  The name originates from a tale of two sisters who lived on opposite sides of the water. The bridge was supposedly built for them, so that they could see each other more often. How sweet! The bridge also owes its name to being so narrow that it was hard two for pedestrians to pass each other. The original bridge (built in 1691) was temporarily removed and expanded in 1871.

At night it is illuminated by over 1,200 shimmering lights. The bascules are raised on average every 20 minutes during the day to let water traffic through. The popular bridge has a presence in pop culture being in many movies, such as the James Bond movie Diamonds are Forever.

Let’s get technical! How do bascule bridges work? The terms drawbridge and bascule bridge are used interchangeably, and in our last blog, we discussed the original reason for their creation, to block off intruders. The term bascule bridge is usually associated with having two leafs (parts of the bridge that raise up). Bascule bridges work with counterweights that balance the leaf. Each leaf of a bascule bridge can be raised independently. In bascule designs, the counterweight is usually located in a massive concrete box containing chambers into which heavy metal rods can be inserted to change the weight and its distribution.

Bascules are the most common type of movable bridge because they require little energy to operate, are comparatively quick, and are reliable. While each drawbridge is specific to its location, size and amount of vehicle or pedestrian activity, all have the same basic components. While they have been used since ancient times, they were powered by steam starting in the 1850s. They could be hydraulically operated by using steam power from coal-burning boilers to pump river water into hydraulic accumulators. The hydraulic accumulators powered the bascule engines, which raised and lowered the bascules. The Nikolaevsky Bridge across the Neva River in Saint Petersburg, Russia was the first large bascule bridge, opened in 1850. 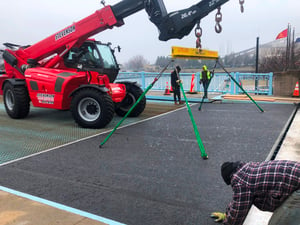 Drawbridges have primarily been steel superstructures with concrete decks or steel grating. Our company focuses on movable bridges because our light weight FRP decking is such a great fit for movable bridges. The light weight greatly reduces the size of mechanical systems and counterweights required. Solid surface FRP is preferred over steel grating as it protects the superstructure underneath, is quieter, and is more comfortable for bicyclists. Contact us to see how FRP decking can be used in your application.