A Unique Bridge Experience in Austria 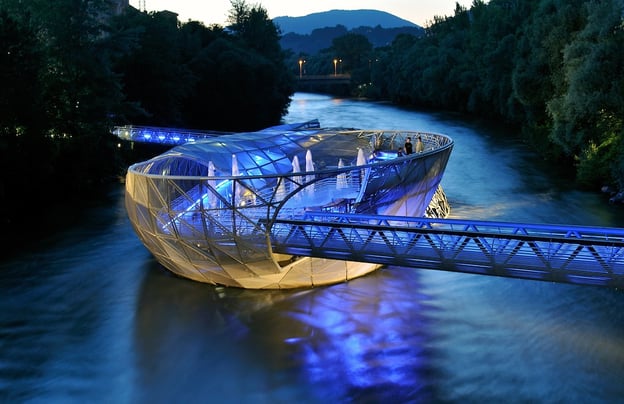 Stop for a second and try to think of the number of bridges you have driven on or walked across today.  It could be a bridge as large as a vast highway overpass on your morning commute, or as small as a footbridge by your house. You can probably think of a few, but most of them may not really stand out. Most bridges that the average person comes across in their lifetime are just that - average.

However, there are a few bridges in the world that are considered substantial landmarks. The most popular ones that come to mind in the US are probably the Golden Gate Bridge in San Francisco and the Brooklyn Bridge in New York City. These bridges are impressive, but there are some you’ve probably never even heard of throughout the world that are more remarkable and extraordinary than you could ever imagine.

One such bridge is Graz, Austria's Island in the Mur, known in German as the Murinsel. This structure spanning the Mur River is a combination of two pedestrian bridges and a man-made floating platform (some even call it an island). The bridge was designed by New York artist Vito Acconci in honor of Graz's 2003 "Capital of Culture" distinction. The main feature of the steel structure is designed to resemble an open seashell and includes a café, a children’s play area and an amphitheater. The official Graz Tourismus website proudly states

After the "Cultural Capital" year [2003] the island would have been sold to another city on another river, unless the locals had fallen in love with it. So it will stay anchored in the river. Probably for the next 50 years. And a once-in-a-century flood will not destroy it. That's what analyses made by the Graz University of Technology promise us.

This unique structure is one that any bridge aficionado can appreciate. We like seeing more communities creating special bridges.