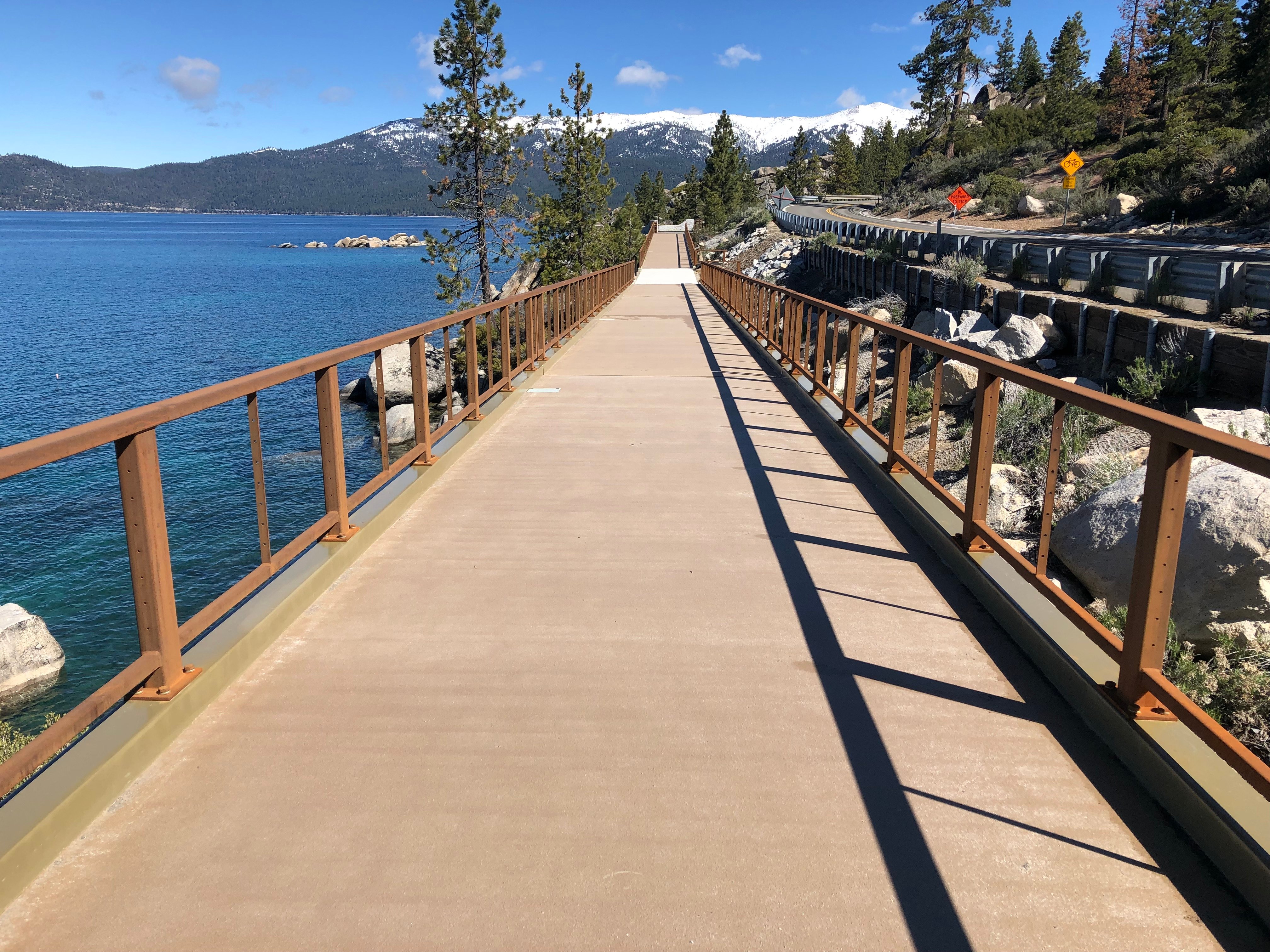 DAYTON, Ohio (August 1, 2019) Every year more than 1 million visitors travel Nevada State Route 28—a two-lane, mountainside road that borders 11 miles of Lake Tahoe’s undeveloped shoreline. With usage expected to double in the next 20 years, limited parking and lack of safe access spurred the Nevada Department of Transportation (NDOT) to initiate a design/build project that would support growing traffic yet protect the area’s fragile ecosystem.

The agency chose Composite Advantage’s fiber reinforced polymer (FRP) FiberSPAN system to help it meet the unique demands of constructing a shared-use path on the region’s rocky uneven slopes. “The scope of the project meant FRP had to take on a larger role in terms of performance,” says Composite Advantage President Scott Reeve.

Each bridge span section was delivered as a prefabricated unit of steel beams, FRP deck and railing.  “In most FRP bridge applications,” he explains, “the steel support beams or trusses provide the primary load carrying structure. But in this case we had to design FRP sections to act as the shear diaphragm for the stringers. We bonded the connection between the deck and steel beams with structural methyl methacrylate adhesive to permit complete shear transfer between the steel and FRP.”

Composite Advantage began prefabricating panels in 2017. The ability to prefabricate and assemble the superstructure at the supplier’s manufacturing facility allowed technicians to bond and mechanically bolt FRP panels to the steel for higher quality and reduced costs and minimize construction activities at the job site.

Thirty-two 40-foot bridge span sections were installed on an 11-mile section of the path. The spans were grouped to create five distinct bridges. “Our FRP pedestrian bridge deck system was used in areas where the slope was too steep to provide flat walking surfaces,” says Reeve.

FRP decks were 134 in. wide and have a 5-in. structural thickness at the thinnest section with a 1 percent cross slope.  Panels are coated with a 1/8-in. non-slip polymer aggregate surface. FRP panels weigh just 8.8 psf.  Deck weight with wear surface, curbs and railing is 12 psf.  Specification requirements called for a uniform live load of 90 psf pedestrian loading. Mid-span deflection of the deck was limited to L/500 and the mid-span deflection of the superstructure was limited to L/360. Vehicle maximum loading was rated at H-5 for a rear axle load of 8,000 lbs. Mid-span FRP deflection was limited to L/300. Uplift load was rated at 30 psf.

FRP’s ability to accommodate a range of design variations, its’ 100-year life cycle and its capacity for use in difficult terrain make it an attractive option for projects like SR 28. “The response has been so positive that there are prospective plans to extend the path created by FRP pedestrian decking,” Reeve says. The NDOT and the Tahoe Transportation District opened the new Tahoe East Shore Trail in June.